New research suggests that fructose, a simple sugar found naturally in fruit and added to many other foods as part of high-fructose corn syrup, does not dampen appetite and may cause people to eat more compared to another simple sugar, glucose.

Glucose and fructose are both simple sugars that are included in equal parts in table sugar. In the new study, brain scans suggest that different things happen in your brain, depending on which sugar you consume.

Yale University researchers looked for appetite-related changes in blood flow in the hypothalamic region of the brains of 20 healthy adults after they ate either glucose or fructose. When people consumed glucose, levels of hormones that play a role in feeling full were high.

In contrast, when participants consumed a fructose beverage, they showed smaller increases in hormones that are associated with satiety (feeling full).

The findings are published in the Jan. 2 issue of the Journal of the American Medical Association .

Dr. Jonathan Purnell, of Oregon Health & Science University in Portland, co-authored an editorial that accompanied the new study. He said that the findings replicate those found in prior animal studies, but “this does not prove that fructose is the cause of the obesity epidemic, only that it is a possible contributor along with many other environmental and genetic factors.”

That said, fructose has found its way into Americans’ diets in the form of sugars – typically in the form of high-fructose corn syrup – that are added to beverages and processed foods. “This increased intake of added sugar containing fructose over the past several decades has coincided with the rise in obesity in the population, and there is strong evidence from animal studies that this increased intake of fructose is playing a role in this phenomenon,” said Purnell, who is associate professor in the university’s division of endocrinology, diabetes and clinical nutrition.

But he stressed that nutritionists do not “recommend avoiding natural sources of fructose, such as fruit, or the occasional use of honey or syrup.” And according to Purnell, “excess consumption of processed sugar can be minimized by preparing meals at home using whole foods and high-fiber grains.”

Connie Diekman, director of university nutrition at Washington University in St. Louis, agreed that more research is needed. “This study provides an interesting look at how the brain reacts to different chemicals found in foods, but how this might impact obesity and the growing number of people who are obese cannot be determined from this study alone,” she said.
Dr. Scott Kahan, director of the National Center for Weight and Wellness in Washington, D.C, added there is a lot that scientists do not know about fructose and how it affects your body. “There are certainly differences between sugar molecules, and these are still being worked out scientifically,” he said. 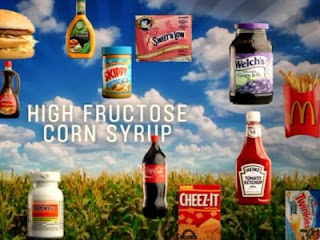 According to Kahan, high-fructose corn syrup, a ubiquitous sweetener that manufacturers love because it is inexpensive, super-sweet and helps extend shelf life, gets a bad rap about its potential role in the obesity epidemic, but it has about the same amount of fructose as table sugar (sucrose). “We don’t entirely know if there is some uniquely unhealthy aspect of high-fructose corn syrup,” he said.

One thing that is clear, Kahan said, is that “almost all of us eat too much sugar, and if we can moderate that we will be healthier on a number of levels.”

Dr. Louis Aronne, founder and director of the Comprehensive Weight Control Program at New York-Presbyterian Hospital/Weill Cornell Medical Center in New York City, noted that most sweeteners contain a mixture of glucose and fructose. For these reasons, “the effect is not as dramatic as you might see in a trial like this.”

Still, a growing body of evidence is pointing toward the hypothalamic brain region as having a role in obesity. “Things as subtle as a change in sweetener can have an impact on how full somebody feels, and could lead to an increase in calorie intake and an increasing pattern in obesity seen in this country,” he said.

So what to do? As a nutritionist, Sharon Zarabi, of Lenox Hill Hospital in New York City, tells her patients to read food labels. “Avoid having fructose or glucose listed as one of as the first three ingredients, and make sure that sugar is less than 10 grams per serving.”

A report from the 2001-04 NHANES (National Health and Nutrition Examination Survey) database showed that Americans get about 22.2 teaspoons of sugar a day or about 355 calories. This is well over the amount the American Heart Association recommends of no more than 100 calories per day for women and no more than 150 calories per day for men. At Heal n Cure our Dietitian works with our patients to reduce their added sugar intake to the bare minimum.

We believe keeping one’s blood sugar stabilized throughout the day leads to positive health outcomes. A typical American diets leads to blood sugars spiking and dropping throughout the day. This causes excess blood sugar to be stored as fat and can contribute to feelings of fatigue and cravings when blood sugars levels drop. This period of low blood sugar can lead to overconsumption of calories at the next meal. Therefore, it is vital we keep our blood sugars in check by consuming a diet rich in whole grains, vegetables, legumes, fruit and by avoiding added sugars as much as possible.

Speak with one of our Wellness Coordinators regarding how functional medicine would be a good fit. Schedule a FREE 15-minute Discovery Call.

To speak with our Wellness Coordinator about whether functional medicine would be a good fit for you, schedule a FREE 15-minute Discovery Call.

Find us on social media

This page is a part of web site at http://healncure.com The information on this site is not a substitute for professional medical advice. Always consult a physician for treatment and guidance about health care issues. The web links to external sites are provided for reference and benefits of patients and healthcare professionals. Heal n Cure does not directly or indirectly endorse the information contained therein.